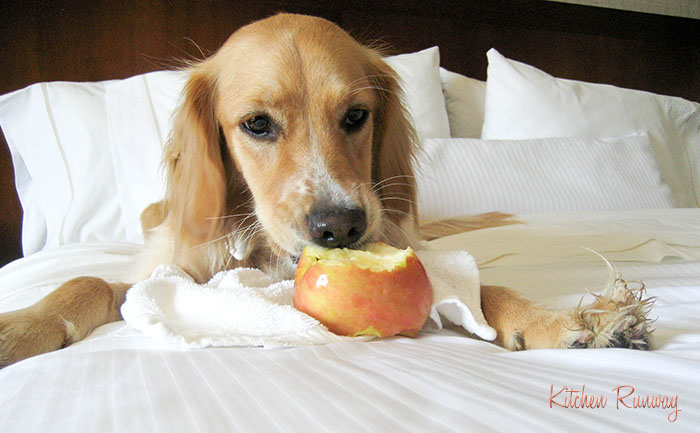 An apple a day keeps the doctor away... well not always. This picture was taken 10 days after having major surgery.

Taylor is a golden retriever mix and as a puppy she was an avid chewer.  While we were away at work she got herself into all sorts of trouble.   She would eventually get bored in her play pen and find interesting ways to entertain herself, such as destroying her bed and pulling all of the stuffing out of it.  Just when we thought she was mature enough to get full reign of the house she would decide that a plant needed pruning and she would take it upon herself to tend to the plants.  This is what happens when your dog is too smart for it’s own good. 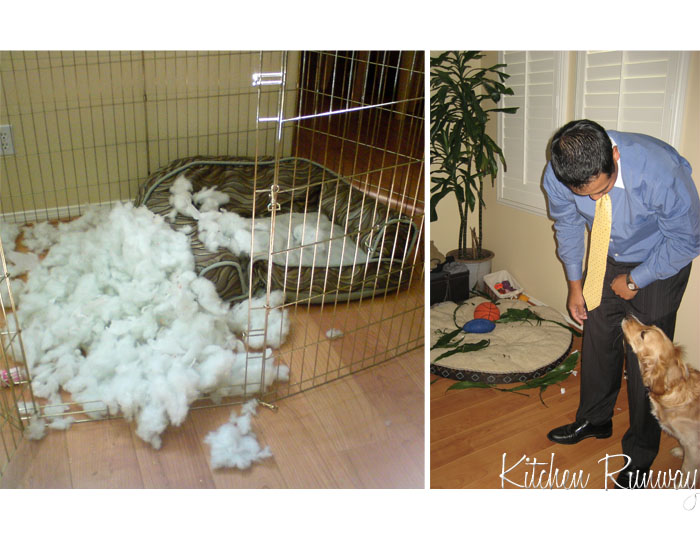 Taylor destroys her bed and Taylor getting reprimanded by her papa.

One day her play pen wasn’t secured before we left for work and Derrick came home and found Taylor laying on our bed.   She was happy and excited to see Derrick come home but she left some troubling evidence on the bed.  There were hard plastic shards scattered on the bed and we quickly realized that it was a hotel sewing kit that was left on my night stand from the night before.  Ironically, I used it the night before to mend a pillow that she decided to use as a chew toy.  Everything inside of the kit was ingested:  a safety pin, sewing needles, buttons and thread including most of the hard plastic case.

We rushed her to the hospital to seek help.  We were terrified and feelings of guilt and sadness overwhelmed us.  It was our fault why she wasn’t safe inside her play pen.  Why didn’t we close our bedroom door that morning?  Why didn’t we put the sewing kit away the night before?  Why wasn’t the play pen locked?  A million different things that we should have done ran through our heads.  It hit us pretty hard because she depends on us for everything and we had let her down.  Now she’s in pain and is hurt because we made a mistake.  We sat in the waiting room quietly waiting as tears streamed down our cheeks.  An emergency animal hospital is one of the saddest places to be – it’s a sterile environment where you witness hurt animals being wheeled in with the look of fear and confusion all across their face and the people around you are all on the verge of devastation.  A trip to the animal hospital is rarely for anything good.

The vet tried using magnets to coax the contents of the sewing kit back up and out through her mouth.  We anxiously waited for an update from the hospital and at 2:00am we finally got a call that the magnet procedure was unsuccessful.  They would have to cut her open.  Of course we couldn’t sleep that night and we laid in bed with tear filled eyes.  Taylor ended up staying in the hospital for over 3 days.   The day she was discharged happened to be Derrick’s birthday and he thought it was a wonderful birthday present.  Derrick was excited to pick her up and we were happy to have her home.  He wanted me to drive so that he can sit in the back seat with Taylor.  When we picked her up she was upset and for the first time she was mad at Derrick.  She refused to kiss him or even look at him on the whole way home.  Derrick was heartbroken.  Taylor is a very sensitive girl and her feelings were hurt.  She was upset that she was left at the hospital, was fed intravenously, and was hooked up on a catheter.  She didn’t understand why she wasn’t allowed to eat, play, or run and why she couldn’t come home.  Lucky for Derrick, she couldn’t stay mad at him for long, by the end of the night she was ready to forgive him. 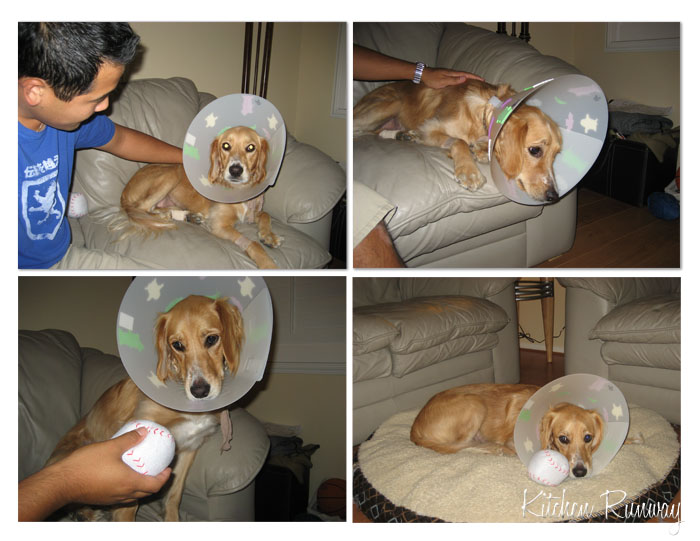 This was one of the saddest days for our family.  We felt immense sadness, pain and hurt.  We are very lucky that Taylor had just turned one and she was young and healthy enough to endure such an invasive and major surgery.  We are happy to report that she hasn’t ingested anything of that magnitude and has steered clear of any hospitals.  Unfortunately, she has developed a fear and dislike for anyone in scrubs.  Overall though, she is a very happy dog.  These days she rarely chews out of boredom.  I think she has learned her lesson that not everything should be eaten and we have learned that you can’t take life for granted.  We’ve learned that moments with your loved ones should be cherished because things can change in a matter of seconds and every decision that you make or don’t make can impact your life in such monumental ways.   We try everyday to live life to the fullest and with purpose.

One thing that Taylor still enjoys chewing on are apples.  It’s one of Taylor’s favorite snacks… especially Fuji apples.  She rushes into the kitchen as soon as she hears the sound of the knife hitting the cutting board.  She is patiently sitting – waiting for you to share a piece of  fresh fruit or vegetable with her.  Derrick says I’m teaching her to beg, but I argue that life is too short to not let her indulge in the things that makes her happy.  I can live with her begging for fresh fruit and veggies while I’m in the kitchen.  I’m okay with that.  I’m okay with a lot of things that Taylor does because I’ve come so close to losing her that I want the rest of her life to be happy and full.  Maybe I’m a bad dog mom, for feeding her people food or enabling her to “beg”.  But I just don’t see the point of sweating the little things when there’s some many other things to be happy about.  At the end of the day, so what if she wants to eat fresh food – if we had to eat the same dried food day in day out we would be begging for fresh fruit too right?!

Here’s an easy recipe for Fuji Apple Bread – honoring Taylor’s favorite variety of apples.  I’ve cut out some of the oil and replaced it with apple sauce to help reduce the fat.  I’ve also used less sugar since Fuji apples are naturally sweet. The baked apples are little pieces of sweetness that runs throughout the bread and the consistency of the bread is spongy.  It’s great straight out of the oven or warmed in the toaster oven the next day plain or with a light smear of butter.  It’s perfect for breakfast, brunch or a quick snack. 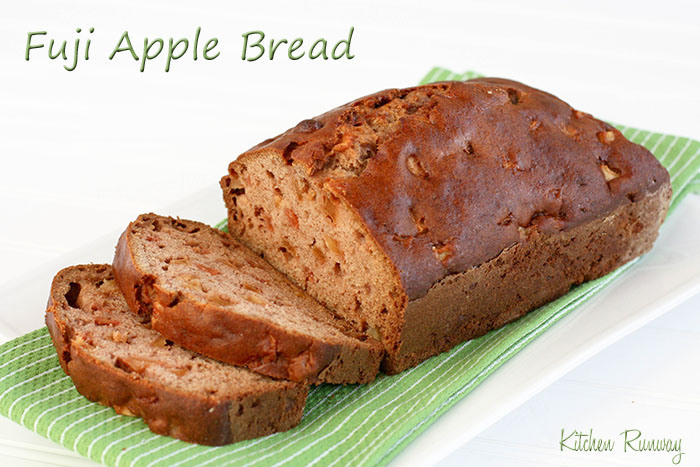 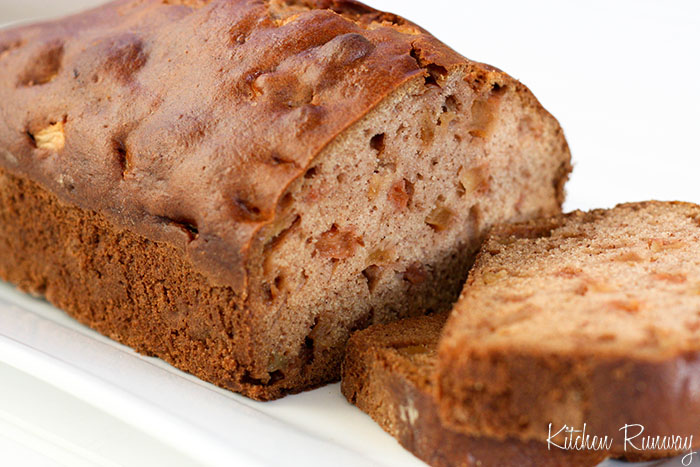